My Favorite Franchise Performance Metric: How Long Should the Payback Period be for franchisees?

One day I was doing my rounds in the U.S., trying to determine the best way of our expansion across the border and into the American market.  I met up with a Venture Capital contact of mine.

As I walked through our business model, he asked me one question: what was the payback period on a franchisee’s investment?

Ever since, this simple question has become my favourite franchise performance metric to track: how long is the Payback Period for a franchisee who buys a location?

I think it’s the ultimate franchise performance metric. Why? The faster the payback, the better for your franchisee and the more successful you, as franchisor, will be in expanding your franchise system. This single metric has the power to help you pinpoint exactly which part of your business you need to improve.

Let me give you an example. Let’s say that, all in, it takes a franchisee three years to recoup and pay back their investment. The question then becomes, how do we reduce this time period? How do we make this investment even more attractive for the franchisee?

Let’s break the Payback Period metric down into the levers:

Start up investment – How do we reduce start up costs for the franchisee?  Can we reduce build-out costs?

Revenue: How do we accelerate the sales ramp up? What start-up marketing systems do we need in place? How can we improve training so that sales come faster and easier? Can we add a pre-sales program?

Costs: How do we reduce their cost structure? Can we reduce the location square footage? Can we leverage our group purchasing to reduce our COGS?

Imagine if this was a constant goal of your franchise system. Imagine having the strategic focus to say, next year one of our Top 3 Wildly Important Goals will be to reduce the Payback Period by 3 months by reducing the start up costs by $25k. Then your team is tasked with figuring out how to make it happen. Imagine how appreciative your franchisees would be? How much easier would it be to sell new locations if you pursued goals like this?

In that long ago meeting with the VC, I was at least smart enough to ask him what he looked for before making an investment.  His answer? He required a payback period of 18 months. Now, bear in mind, a VC typically invests in technology companies. So, for him to invest in retail, it would have to  be a knock out opportunity.  I left that meeting thinking two things: 1) there is no way our Payback Period is even close to 18 months, and 2) how long is it?

I have since settled on a good benchmark number for most franchises: three years.  Everything is upside after three years of hard work to pay back your initial investment.  If you can get your company’s Payback Period to within three years, that is a going to be a really good investment as a franchisee.  And as a franchise system, you will be highly competitive and should have no problem attracting new franchise partners.

I’m not a “ROI” fan in when evaluating a franchise system. Why? It doesn’t take into account ROT or “Return on Time.” For example, if you have 200k to invest. you could:

Let’s say with option B, you make, after combining your salary and profit, $100k per year. That is a far higher ROI than if you had invested your money in the stock market. But it would also require working a 60–70-hour week. So how do you value this? What salary would you have to pay someone to do your job? And what profit would  you have left over after that salary is paid? Answer these questions and you will have a better snapshot of the real ROI, and the ROT.

This example illustrates why the Payback Period is a much better franchise performance metric to analyze your system. And if you can start a franchise system with this in mind, your path to franchise success will be a lot faster.

After starting multiple franchise businesses, building and running multiple franchise brands, spending 15 years immersing ourselves into all things franchising, learning how to build a world class organization, and of course, answering the question “how do I franchise my business” at least 150 times, we have compiled our learnings into our Top 10 Habits of Best in Class Franchisors.” Free download below. 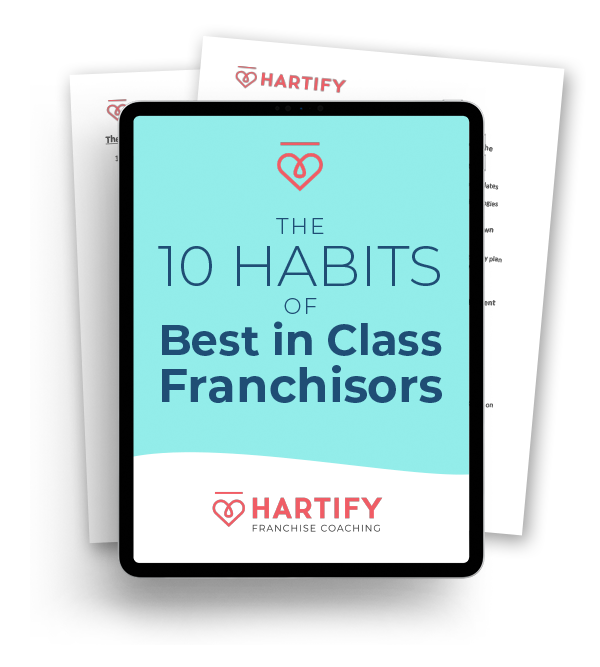 The Top 10 Habits checklist provides the 10 most important functions that should be on autopilot for your franchise business to grow and scale predictably  and smoothly.

Manage Cookie Consent
To provide the best experiences, we use technologies like cookies to store and/or access device information. Consenting to these technologies will allow us to process data such as browsing behavior or unique IDs on this site. Not consenting or withdrawing consent, may adversely affect certain features and functions.
Manage options Manage services Manage vendors Read more about these purposes
View preferences
{title} {title} {title}

The Top 10 Habits checklist provides the 10 most important functions that should be on autopilot for your franchise business to grow and scale predictably and smoothly.